Good Will Hunting is an American drama movie written by Affleck and Damon and it was released in 1997. The movie shows about a 20-year-old Janitor a genius who becomes a part of the prosecution agreement as he assaults a police officer for this he becomes a client of a therapist and on the other hand, he studies advanced mathematics from a former professor. During his therapy session, he evaluates his relationship such as with his girlfriend, friends, himself, and does a significant task of confronting his past and looking towards his future.
There are some love lessons from this movie which we have listed;
1. Love is worth it: love is worth it to hold if it is real. Don’t leave that love which you feel is real for some shit small reasons.
2. Love is loving: Love is loving other people more than yourselves. When we’re in love we should another person up above us by loving them more.
3. Fear Pushes love: Never fear to love someone, if you’ll fear then love will go so far away and you won’t be able to look the magic of love.
These were some love lessons, we have also listed amazing Good Will Hunting Quotes for you. Do enjoy them and keep up good with your close ones.

“I gotta see about a girl.”

“Well, I got her number. How do you like them apples?”

“I love you. I wanna hear you say that you don’t love me. Because if you say that, then I won’t call you, and I won’t be in your life.”

“You’ll never have that kind of relationship in a world where you’re afraid to take the first step because all you see is every negative thing 10 miles down the road.”

“People call those imperfections, but no, that’s the good stuff.”

“You’re not perfect, sport, and let me save you the suspense.”

“This girl you’ve met, she’s not perfect either. But the question is whether or not you’re perfect for each other.”

“The only feeling of real loss is when you love someone more than you love yourself.”

“And why does he hang out with those retarded gorillas, as you called them? Because any one of them, if he asked them to, would take a f*cking bat to your head, okay? It’s called loyalty.”

“You’re afraid of me! You’re afraid that I won’t love you back! f*ck it, I wanna give it a shot! At least I’m honest with you.” 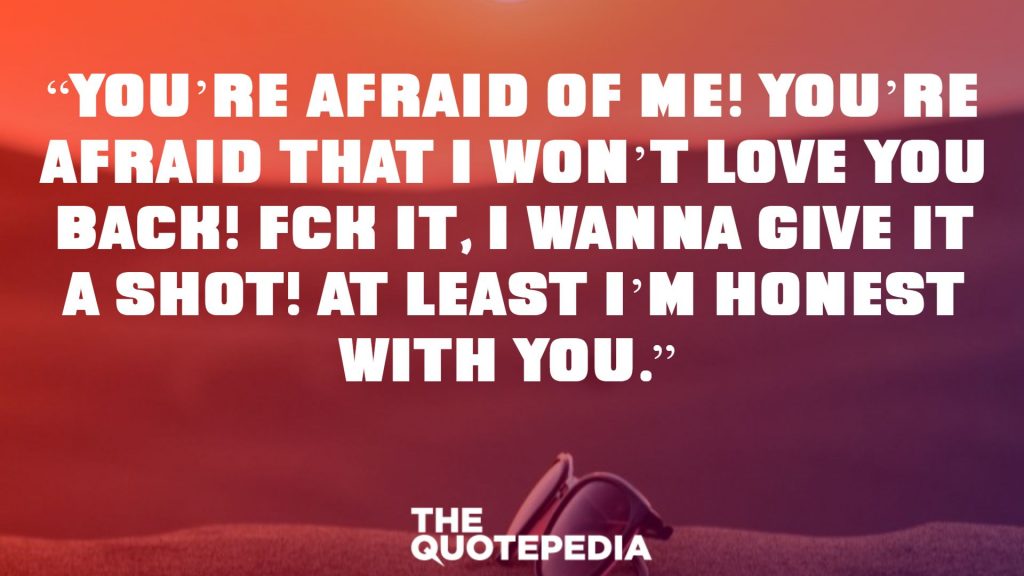 “Beethoven, okay. He looked at a piano, and it just made sense to him. He could just play.”

“You’re just a kid, you don’t have the faintest idea what you’re talkin’ about.”

“You know Chuck; he’s family. He’d lie down in f*ckin’ traffic for you. No, I’m talking about someone who opens up things for you – touches your soul.”

“You’ll have bad times, but it’ll always wake you up to the good stuff you weren’t paying attention to.”

“Personally… I don’t give a sh*t about all that, because you know what, I can’t learn anything from you, I can’t read in some f*ckin’ book. Unless you want to talk about you, who you are. Then I’m fascinated. I’m in. But you don’t want to do that do you sport? You’re terrified of what you might say. Your move, chief.”

“He pushes people away before they get a chance to leave him. It’s a defense mechanism. And for 20 years he’s been alone because of that. And if you push him right now, it’s gonna be the same thing all over again and I’m not gonna let that happen to him.”

“See, the sad thing about a guy like you is, in 50 years you’re gonna start doin’ some thinkin’ on your own and you’re going to come up with the fact that there are two certainties in life: one, don’t do that, and two, you dropped 150 grand on a fuckin’ education you could have got for a dollar fifty in late charges at the public library!”

“Most people never get to see how brilliant they can be. They don’t find teachers that believe in them. They get convinced they’re stupid.”

“You don’t know about real loss, because it only occurs when you’ve loved something more than you love yourself. And I doubt you’ve ever dared to love anybody that much.”

“Nail them while they’re vulnerable, that’s my motto.”

“So this is a Harvard bar? I thought there’d be equations and shit on the wall.”

“- Skylar: Maybe we could go out for coffee sometime?

– Will Hunting: Great, or maybe we could get together and just eat a bunch of caramels.

– Will Hunting: When you think about it, it’s just as arbitrary as drinking coffee.”

“I love you. I wanna hear you say that you don’t love me. Because if you say that, then I won’t call you, and I won’t be in your life…”

“You’ll never have that kind of relationship in a world where you’re afraid to take the first step because all you see is every negative thing 10 miles down the road.”

“People call those imperfections, but no, that’s the good stuff.”

“At the current time I am looking at a number of different fields from which to disseminate which offer is most pursuant to my benefit. What do you want? What do I want? What does anybody want? Leniency.”

“You’re right, Will. I can’t do this proof. But you can, and when it comes to that it’s only about… it’s just a handful of people in the world who can tell the difference between you and me. But I’m one of them.”

“Maybe you’re perfect right now. Maybe you don’t wanna ruin that. I think that’s a super philosophy, Will; that way you can go through your entire life without ever having to really know anybody..”

“I think you could show me some appreciation.”

“Beethoven, okay. He looked at a piano, and it just made sense to him. He could just play.”

“You played a hand, and you lost. You lost a big f*ckin’ hand. Some people will lose a big hand like that and have the sack to ante up again.”

“He just sat there, counting the seconds until the session was over. It was pretty impressive, actually.”

“When you think about it, it’s just as arbitrary as drinking coffee.”

“You’re legally allowed to drink now, so we figured the best thing for you was a car.”

“You’re afraid of me! You’re afraid that I won’t love you back! f*ck it, I wanna give it a shot! At least I’m honest with you.”

“To prove to me that he doesn’t have to talk to me, if he doesn’t want to.”

“Every day I come by your house and I pick you up. And we go out. We have a few drinks, and a few laughs, and it’s great. But you know what the best part of my day is? For about ten seconds, from when I pull up to the curb and when I get to your door, ’cause I think, maybe I’ll get up there and I’ll knock on the door and you won’t be there. No goodbye. No see you later. No nothing. You just left. I don’t know much, but I know that.”

“I just have a little question here. You could be a janitor anywhere. Why did work at the most prestigious technical college in the whole f*ckin’ world? And why did you sneak around at night and finish other people’s formulas that only one or two people in the world could do and then lie about it? ‘Cause I don’t see a lot of honor in that, Will.”

These were some of our top picked Good Will Hunting Quotes, keep following The Quotepedia for more wonderful and motivational quotes

Related quotes:  70+ The Hitchhiker's Guide to the Galaxy Quotes To Look Beyond This World

80+ Quotes To Make Him Hard To Have Some Fun

The relationship the best feeling in the world, but it is incomplete without some fun and dirty things. Always guys...