The best relationship in the world, Mother And Son. The purest relationship is pf mother and son. Mother is the greatest warrior who fights everything for her son in this world. Adore your mother as she is with you, respect her care and love, take care of her and love her because not everyone is blessed with this greatest gift of the god. Some son loses their mom in their childhood and it is very difficult to survive in this world without a mother.
Caress of the mother is required for every child whether it is son or daughter. Admire and adore the time you spend with your mother till she is with you once you lost this time with her, you’ll just regret that you didn’t spend time with your mother.
Mother,
A person whose love is pure,
A person whose care is real,
A person whose control is safe,
The best thing one can ever get,
Mother,
Right from being pampered in childhood,
To getting scold in adulthood,
She sticks to us from dusk till dawn,
She holds us in every twist and turn,
It’s a bliss to have her in your life,
But not all get godsend in their life,
The kid who has, don’t value this,
One who don’t, knows how it’s a bliss,
Mother,
The one who don’t,
Feels everything is so empty,
But a hope says someone will pour it quickly,
Her caress feels so peace,
Not everyone gets that ease,
In the feeling of being in pieces,
Her hug fix all the deep bruises,
It’s a dream for the one who don’t,
That one day someone will make that dream to exist,
Mother, the divine gift which exists.
And not everyone is blessed with this gift.
We have listed some Mother And Son Quotes to show the pure bond to their. Do share with your mom and son and express your feelings.

“There has never been, nor will there ever be, anything quite so special as the love between the mother and a son.”

“A man loves his sweetheart the most, his wife the best, but his mother the longest.”

“Mothers are inscrutable beings to their sons, always.”

“Sons are the anchors of a mother’s life.”

“You may have tangible wealth untold; Caskets of jewels and coffers of gold. Richer than I you can never be. I had a mother who read to me.” 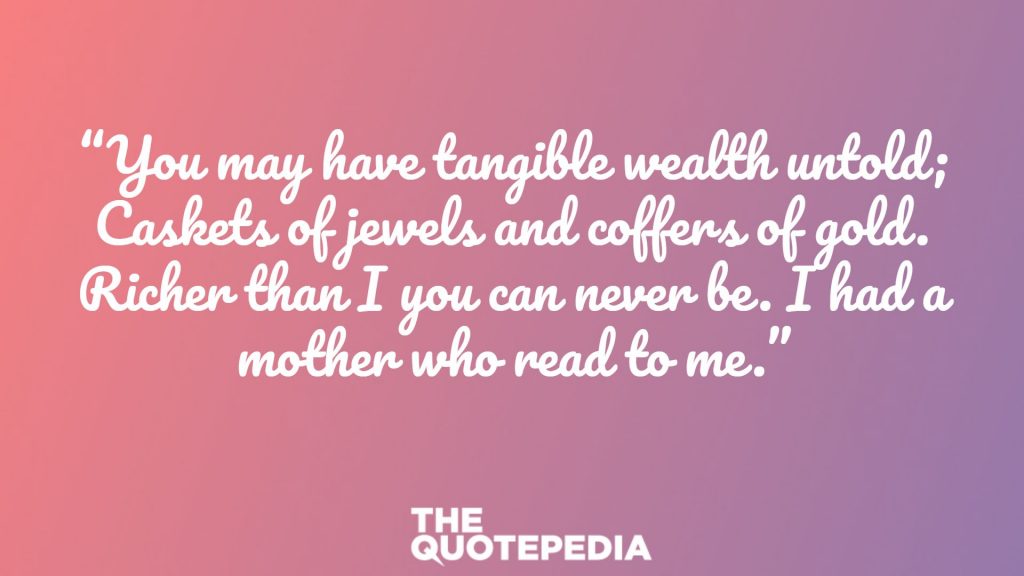 “Mother is her son’s first god. She must teach him the most important lesson of all – how to love.” 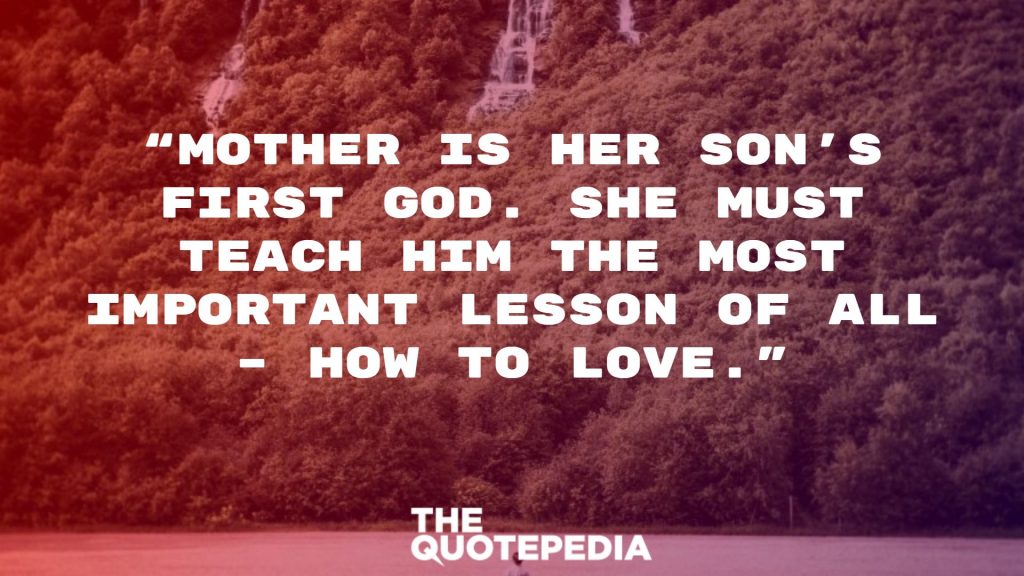 “A mother’s arms are made of tenderness and children sleep soundly in them.”

“My mother is my root, my foundation. She planted the seed that I base my life on, and that is the belief that the ability to achieve starts in your mind.”

“If a man has been his mother’s undisputed darling he retains throughout life the triumphant feeling, the confidence in success, which not seldom brings actual success along with it.”

“Every mother hopes that her daughter will marry a better man than she did, and is convinced that her son will never find a wife as good as his father did.”

“Even more than the time when she gave birth, a mother feels her greatest joy when she hears others refer to her son as a wise learned one.”

“Raising boys has made me a more generous woman than I really am. Undoubtedly, there are other routes to learning the wishes and dreams of the presumably opposite sex, but I know of none more direct, or more highly motivating, than being the mother of sons.”

“Having a child makes you realize the importance of life, narcissism goes out the window. Heaven on earth is looking at my little boy. The minute he was born, I knew if I never did anything other than being a mom, I’d be fine.”

“My father died when I was seven, leaving a widow and five sons, ranging in age from five to seventeen. My mother was the most highly disciplined and hardest working person I have ever known, and this, combined with her love and gentleness, enabled her to make a success of each of her children.”

“The best love in the world is the love of a man. The love of a man who came from your womb, the love of your son! I don’t have a daughter, but maybe the love of a daughter is the best, too. I am first and foremost me, but right after that, I am a mother. The best thing that I can ever be, is me. But the best gift that I will ever have, is being a mother.”

“There will be many times you will feel like you have failed. But in the eyes, heart and mind of your child, you are supermom.” – Stephanie Precourt

“Happy is the son whose faith in his mother remains unchallenged.”

“Every man looks for a girlfriend that has his mother’s qualities.”

“Holding my Mother’s ashes in my hand. A thunder of pain smashes in my heart. The beauty of her smile, always allowed me to go the extra mile. As thoughts pile up in my mind, the sound of her voice brings comfort. Even though she is gone, she taught me how to be strong. I am thinking of the day you were taken. A Son’s memories shattered in silence. But your life is a beacon for my soul. Mother, dearest Mother, no other woman compares to you. You were strong in the darkest hour and you showed me the strength to achieve victory. So at this moment my victories and achievements belong to you.”

“The heart of a mother is a deep abyss at the bottom of which you will always find forgiveness.”

“The mother’s heart is the child’s schoolroom.”

“No matter your age, you always need your mom.”

“Every beetle is a gazelle in the eyes of its mother.”

“A mother’s arms are more comforting than anyone else’s.”

“To wake up to the sound of my son saying ‘Mama, mama!’ It’s the best sound ever.”

“A mother’s love doesn’t make her son more dependent and timid; it actually makes him stronger and more independent.”

“We almost lost my mom to cancer 10 years ago — she survived. Every day we’re a grateful family to have her and all our loved ones around us.”

“[My mom]’s a cool chick. We can hang, and she can roll with the punches.”

“My mother never gave up on me. I messed up in school so much they were sending me home, but my mother sent me right back.”

“Mothers yielding Bibles, contemplating smearing the blood of lamb chops over her doorway. Anything to keep her son alive another day.”

“Let France have good mothers, and she will have good sons.”

“Some mothers are kissing mothers and some are scolding mothers, but it is love just the same, and most mothers kiss and scold together.”

“When I was a child, my mother said to me, ‘If you become a soldier, you’ll be a general. If you become a monk you’ll end up as the pope.’ Instead I became a painter and wound up as Picasso.”

“My mom was the person that I most looked up to for her point of view, her humor.”

“I wouldn’t be doing any of this if it weren’t for her, both my parents. She supported this little kid who said, ‘I want to be an actor,’ at 12 years old, which is ridiculous, and she drove me to all these auditions … She’s the only reason I’m able to do what I do.”

“A mother understands what a child does not say.”

“That strong mother doesn’t tell her cub, Son, stay weak so the wolves can get you. She says, Toughen up, this is reality we are living in.”

“You are ugly when you love her, you are beautiful and fresh, vital and free, modern and poetic. When you don’t, you are more beautiful as an orphan than as your mother’s son.”

“A mother is the truest friend we have, when trials, heavy and sudden, fall upon us; when adversity takes the place of prosperity; when friends who rejoice with us in our sunshine, desert us when troubles thicken around us, still will she cling to us, and endeavor by her kind precepts and counsels to dissipate the clouds of darkness, and cause peace to return to our hearts.”

These were some of our top picked Mother And Son Quotes, keep following The Quotepedia for more wonderful and motivational quotes

Related quotes:  70+ The Hitchhiker's Guide to the Galaxy Quotes To Look Beyond This World