Of Mice And Men is a novel published in 1937 and was written by John Steinbeck. The novel shows about two workers named George Milton and Lennie Small who moves from town to town in California in search of new jobs during the time of great depression in the United States. The novel written by John is based on his true experience, as he worked as a migrant farm when he was a teenager in the 1910s.

John took this title for the novel from getting inspired by a poem name to a mouse written by Robert Burns. Though the novel consists of vulgarity and some offensive and racist language, still it is taught in schools and the book is in the American Library Association list as the most challenged book in the 20th century.

Apart from the offensive language and vulgarity the book also contains some life learning lessons;

These were some true life lessons from the novel, and the novel also has quotes which will be helpful for inspiration and to understand life. We have listed the best Of Mice And Men Quotes for you. Do enjoy them and help everyone, spread happiness.

Of Mice And Men Quotes

“Lennie—if you jus’ happen to get in trouble like you always done before, I want you to come right here an’ hide in the brush… Hide in the brush till I come for you.”

“A guy needs somebody―to be near him. A guy goes nuts if he ain’t got nobody. Don’t make no difference who the guy is, long’s he’s with you. I tell ya, I tell ya a guy gets too lonely an’ he gets sick.”

“Lennie said quietly, “It ain’t no lie. We’re gonna do it. Gonna get a little place an’ live on the fatta the lan’.”

“But you get used to goin’ around with a guy an’ you can’t get rid of him.”

“Well, I never seen one guy take so much trouble for another guy. I just like to know what your interest is.”

“We’ll have a big vegetable patch and a rabbit hutch and chickens. And when it rains in the winter, we’ll just say the hell with goin’ to work, and we’ll build up a fire in the stove and set around it an’ listen to the rain comin’ down on the roof – nuts!”

“I ought to of shot that dog myself, George. I shouldn’t ought to of let no stranger shoot my dog.”

“Maybe ever’body in the whole damn world is scared of each other.”

“I seen the guys that go around on the ranches alone. That ain’t no good. They don’t have no fun. After a long time they get mean. They get wantin’ to fight all the time.”

“Guys like us got nothing to look ahead to.”

″‘Come on in and set a while,’ Crooks said. ‘Long as you won’t get out and leave me alone, you might as well set down.‘”

“A guy sets alone out here at night, maybe readin’ books or thinkin’ or stuff like that.” 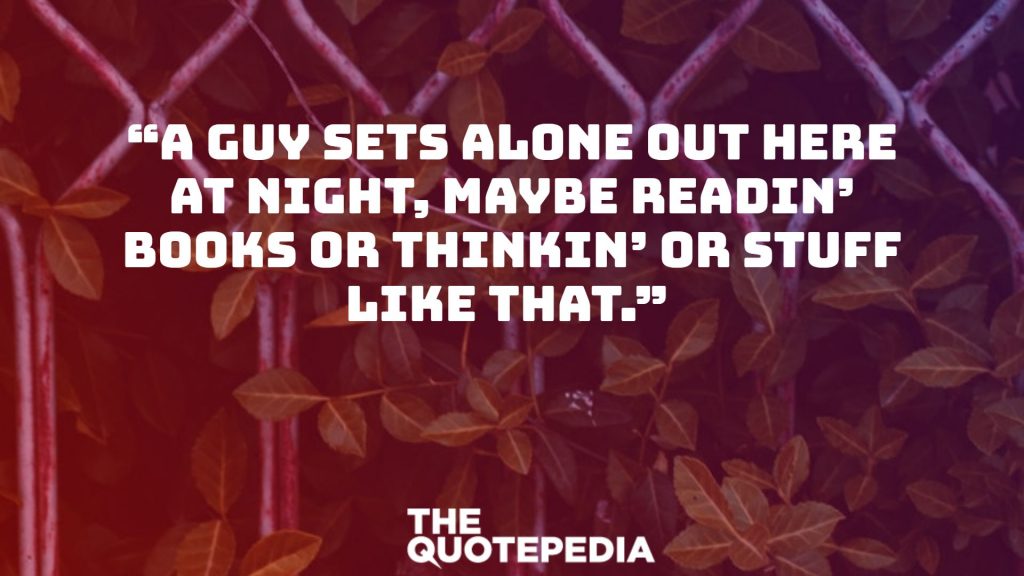 “If I catch any one man, and he’s alone, I get along fine with him. But just let two of the guys get together an’ you won’t talk. Jus’ nothing but mad. You’re all scared of each other, that’s what. Ever’ one of you’s scared the rest is goin’ to get something on you.”

“Well, you keep your place then, Nigger. I could get you strung upon a tree so easy it ain’t even funny.”

“Crooks avoided the whole subject now. “Maybe you guys better go,” he said. “I ain’t sure I want you in here no more. A colored man got to have some rights even if he don’t like ’em.”

“Crooks had reduced himself to nothing. There was no personality, no ego—nothing to arouse either like or dislike. He said, “Yes, ma’am,” and his voice was toneless.”

“Guy don’t need no sense to be a nice fella. Seems to me sometimes it jus’ works the other way around. Take a real smart guy and he ain’t hardly ever a nice fella.”

“We know what we got, and we don’t care whether you know it or not.”

“In every bit of honest writing in the world, there is a base theme. Try to understand men, if you understand each other you will be kind to each other.”

“There are shorter means, many of them. There is writing promoting social change, writing punishing injustice, writing in celebration of heroism, but always that base theme.”

“Try to understand each other!”

“His ear heard more than was said to him, and his slow speech had overtones not of thought, but of understanding beyond thought.”

“For two bits I’d shove out of here. If we can get jus’ a few dollars in the poke we’ll shove off and go up the American River and pan gold. We can make maybe a couple of dollars a day there, and we might hit a pocket.”

“Just like heaven. Ever’body wants a little piece of lan’. I read plenty of books out here. Nobody never gets to heaven, and nobody gets no land. It’s just in their head. They’re all the time talkin’ about it, but it’s jus’ in their head.”

“They fell into a silence. They looked at one another, amazed. This thing they had never really believed in was coming true.”

“We could live offa the fatta the lan’.”

“Tonight I’m gonna lay right here and look up. I like it.”

“…If I was bright, if I was even a little bit smart, I’d have my own little place, an’ I’d be bringin’ in my own crops, ‘stead of doin’ all the work and not getting what comes up outa the ground.”

“George said softly, “—I think I knowed from the very first. I think I knowed we’d never do her. He usta like to hear about it so much I got to thinking maybe we would.”

“O.K. Someday—we’re gonna get the jack together and we’re gonna have a little house and a couple of acres an’ a cow and some pigs.”

“It ain’t so funny, him an’ me goin’ aroun’ together,” George said at last. “Him and me was both born in Auburn. I knowed his Aunt Clara. She took him when he was a baby and raised him up. When his Aunt Clara died, Lennie just come along with me out workin’. Got kinda used to each other after a little while.”

“He moved with a majesty only achieved by royalty and master craftsman. He was a jerkline skinner, the prince of the ranch, capable of driving ten, sixteen, even twenty mules with a single line to the leaders. He was capable of killing a fly on the wheeler’s butt with a bull whip without touching the mule.”

“There was a gravity in his manner and a quiet so profound that all talk stopped when he spoke, His authority was so great that his word was taken on any subject, be it politics or love. This was Slim, the jerkline skinner.”

“Then—it’s all off?” Candy asked sulkily. George didn’t answer his question. George said, “I’ll work my month an’ I’ll take my fifty bucks an’ I’ll stay all night in some lousy cat house. Or I’ll set in some poolroom til ever’body goes home. An’ then I’ll come back an’ work another month an’ I’ll have fifty bucks more.”

“George—why ain’t we goin’ on to the ranch and get some supper? They got supper at the ranch. George rolled on his side. “No reason at all for you. I like it here. Tomorra we’re gonna go to work. I seen thrashin’ machines on the way down. That means we’ll be bucking grain bags, bustin’ a gut.”

“George’s voice became deeper. He repeated his words rhythmically as though he had said them many times before. ‘Guys like us, that work on ranches, are the loneliest guys in the world. They got no family. They don’t belong no place. They come to a ranch an’ work up a stake, and the first thing you know they’re poundin’ their tail on some other ranch. They ain’t got nothing to look ahead to.”

These were some of our top picked Of Mice And Men Quotes, keep following The Quotepedia for more wonderful and motivational quotes