Henry David Thoreau was an American philosopher, writer and poet. He was a transcendentalist. He is best known for his book Walden based on mankind living around the natural surroundings. He was also known for his essay “Civil Disobedience” and his essay “Civil Disobedience” which was an argument against the injustice which was done by the government.
He was arrested and was imprisoned for one night for not paying poll tax. This was the incident which charged him to write his “Civil Disobedience” essay which is one of the most influential writing up till now. His essay is also known as resistance to government. Thoreau deeply studied the political views, opposed slavery and the Mexican-American War.
His literary style interlink close observation of nature, pointed rhetoric, symbolic meanings, personal experience, and historical beliefs, he displayed all this by showing a poetic philosophical austerity, attention to practical detail, and sensibility. He was deeply interested in the idea of survival with the help of natural surroundings by considering the historical point of view.

“Rather than love, than money, than fame, give me truth.”

“The universe is wider than our views of it.” 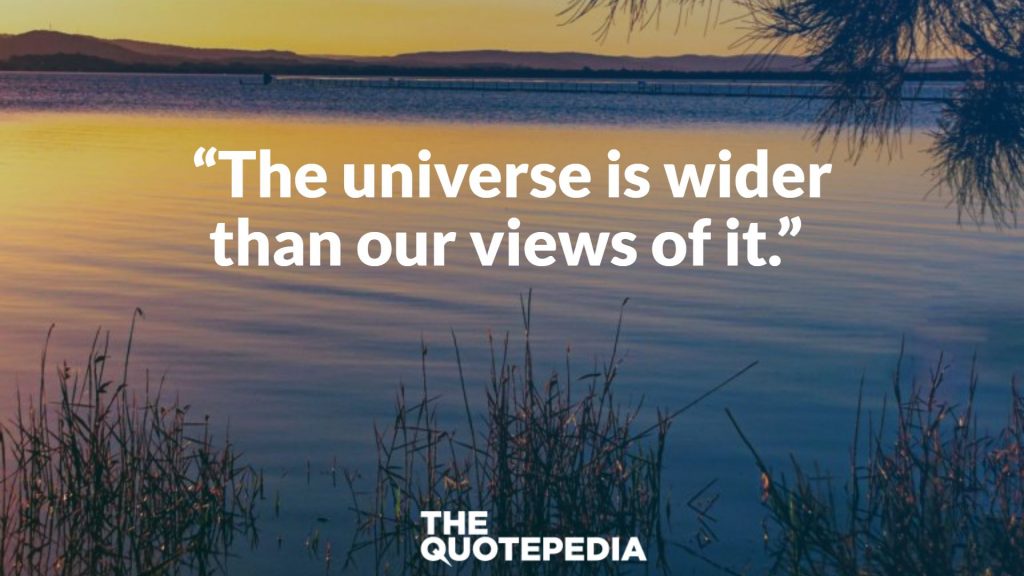 “Rather than love, than money, than fame, give me truth.”

“How vain it is to sit down to write when you have not stood up to live.”

“The question is not what you look at, but what you see.”

“Surely joy is the condition of life.”

“Dreams are the touchstones of our characters.”

“Be not simply good – be good for something.”

“Only that traveling is good which reveals to me the value of home and enables me to enjoy it better.”

“The language of friendship is not words but meanings.”

“Never look back unless you are planning to go that way.”

“It appears to be a law that you cannot have a deep sympathy with both man and nature.”

“Wealth is the ability to fully experience life.”

“Be yourself- not your idea of what you think somebody else’s idea of yourself should be.”

“Goodness is the only investment that never fails.”

“All good things are wild and free.”

“I went to the woods because I wished to live deliberately…”

“If you have built castles in the air, your work need not be lost; that is where they should be. Now put the foundations under them”

“We need the tonic of wildness…At the same time that we are earnest to explore and learn all things, we require that all things be mysterious and unexplorable, that land and sea be indefinitely wild, unsurveyed and unfathomed by us because unfathomable. We can never have enough of nature.”

“The world is but a canvas for our imagination.”

“Not until we are lost do we begin to understand ourselves.”

“Our life is frittered away by detail…simplify, simplify.”

“Do not hire a man who does your work for money, but him who does it for love of it.”

“It’s not what you look at that matters, it’s what you see.”

“Thank God men cannot fly, and lay waste the sky as well as the earth.”

“Not all who wander are lost.”

“Happiness is like a butterfly; the more you chase it, the more it will elude you. But if you turn you attention to other things, it will come and sit softly on your shoulder.”

“If one advances confidently in the direction of his dreams, and endeavours to live the life which he has imagined, he will meet with success unexpected in common hours.”

“Most of the luxuries and many so-called comforts of life are not only not indispensable, but positive hindrances to the elevation of mankind.”

“I know of no more encouraging fact than the unquestionable ability of a man to elevate his life by conscious endeavour.”

“Never look back unless you are planning to go that way.”

“Dreams are the touchstones of our character.”

“The question is not what you look at, but what you see.”

“Things do not change, we do.”

“The only people who ever get anyplace interesting are the people who get lost.”

“Be yourself – not your idea of what you think somebody else’s idea of yourself should be.”

“Do not lose hold of your dreams or aspirations. For if you do, you may still exist but you have ceased to live.”

“When it’s time to die, let us not discover that we have never lived.”

“Never look back – unless you’re planning to go that way.”

“Simplify your life. Don’t waste the years struggling for things that are unimportant. Don’t burden yourself with possessions. Keep your needs and wants simple and enjoy what you have. Don’t destroy your peace of mind by looking back, worrying about the past. Live in the present. Simplify!”

“Go confidently in the direction of your dreams. Live the life you’ve imagined.”

“Do what you love. Know your own bone; gnaw at it, bury it, unearth it, and gnaw it still.”

“You must live in the present, launch yourself on every wave, find your eternity in each moment. Fools stand on their island of opportunities and look toward another land. There is no other land; there is no other life but this.”

“If you have built castles in the air, your work need not be lost; that is where they should be. Now put the foundations under them.”

“Enthusiasm is a supernatural serenity.”

These were some of our top picked Henry David Thoreau Quotes, keep following The Quotepedia for more wonderful and motivational quotes