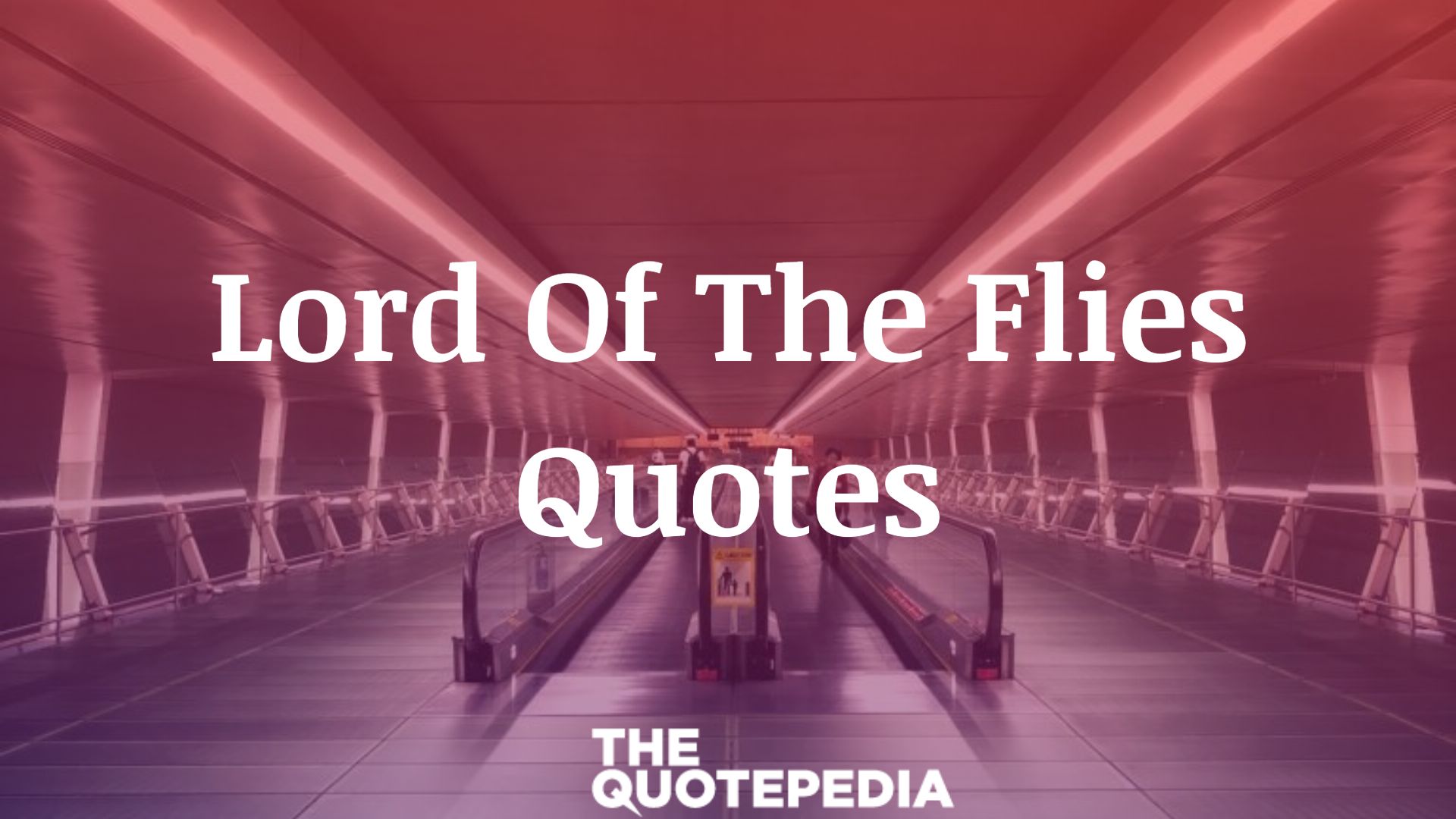 Lord Of The Flies is the novel which was published in 1954 by William Golding fro which he received the noble prize. The shows about a group of boys who stays an inhabited island all on their own with different thinking and individuality, between moral and, between good and bad emotions. The novel has received several honors from which one is from the time magazine, they listed this novel as one the 100 best English novels published from 1923 to 2005. In 2006 UK poll made Lord Of The Flies at 3rd rank in the nation’s favorite book from school.
This novel is more read by adults and mid teenagers as this novel teaches many things to just turn the personality in a different way and to be a rational person. One can learn lessons;
1. Most of the humans are evil and power-hungry: people are just power-hungry and evil in reality, they are not such as the fairytale shows us. No matter how much a person is kind but if the mind of that person is not rational then there is evilness in it too.
2. There’s been made differences in social class: everyone just differentiates between social classes, rich don’t respect poor, powerful doesn’t protect weakly, all just runs in the pack with the people of same notions.
3. Survival makes kill one another: in extreme, a person just sees his survival and can kill his own mate or family. People just look for their survival and don’t give their life for another person who can be saved.
We have listed Lord Of The Flies Quotes which change the mind and can help to make think a person rationally. Do enjoy it and distinct between emotions properly.

Lord Of The Flies Quotes

“He capered toward Bill, and the mask was a thing on its own, behind which Jack hid, liberated from shame and self-consciousness.”

“We’ve got to have rules and obey them. After all, we’re not savages. We’re English, and the English are best at everything.”

“Kill the pig. Cut her throat. Spill her blood.”

“His mind was crowded with memories; memories of the knowledge that had come to them when they closed in on the struggling pig, knowledge that they had outwitted a living thing, imposed their will upon it, taken away its life like a long satisfying drink.”

“Which is better—to have rules and agree, or to hunt and kill?”

“Ralph wept for the end of innocence, the darkness of man’s heart, and the fall through the air of a true, wise friend called Piggy.”

“They looked at each other, baffled, in love and hate.”

“There aren’t any grownups. We shall have to look after ourselves.”

“The thing is – fear can’t hurt you any more than a dream.”

“What are we? Humans? Or animals? Or savages? What’s grownups going to think?” 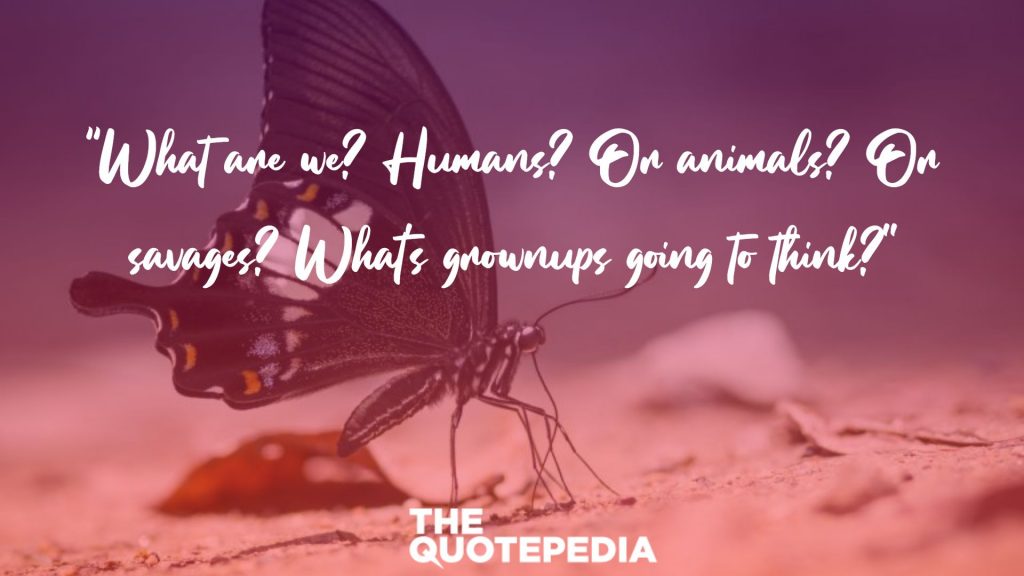 “Piggy moved among the crowd, asking names and frowning to remember them. The children gave him the same simple obedience that they had given to the man with the megaphones.”

“Ralph sat on a fallen trunk, his left side to the sun. On his right were most of the choir; on his left the larger boys who had not known each other before the evacuation; before him small children squatted in the grass.”

“The world, that understandable and lawful world, was slipping away.” 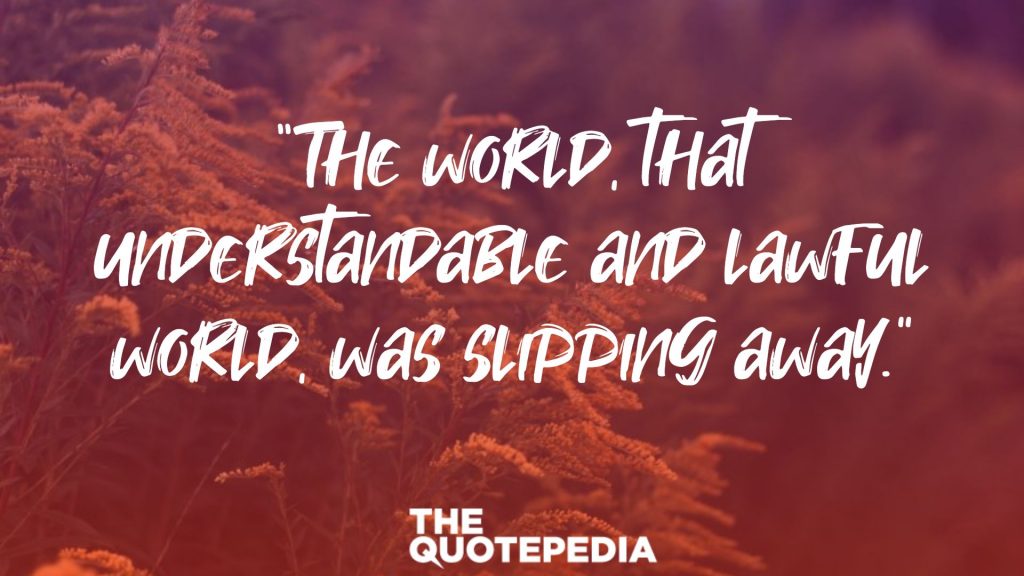 “Piggy and Ralph, under the threat of the sky found themselves eager to take a place in this demented but partly secure society. They were glad to touch the brown backs of the fence that hemmed in the terror and made it governable”

“Within the diamond haze of the beach something dark was fumbling along. Ralph saw it first, and watched until the intentness of his gaze drew all eyes that way. Then the creature stepped from mirage onto clear sand, and they saw that the darkness was not all shadow but mostly clothing. The creature was a party of boys”

“Simon, walking in front of Ralph, felt a flicker of incredulity—a beast with claws that scratched, that sat on a mountain-top, that left no tracks and yet was not fast enough to catch Samneric. However Simon thought of the beast, there rose before his inward sight the picture of a human, at once heroic and sick.”

″‘Then we must go as we are,’ said Ralph, ‘and they won’t be any better.’ Eric made a detaining gesture.

‘But they’ll be painted! You know how it is.’

The others nodded. They understood only too well the liberation into savagery that the concealing paint brought. ”

“Grownups know things,” said Piggy. “They ain’t afraid of the dark. They’d meet and have tea and discuss. Then things ‘ud be all right-”

“Something deep in Ralph spoke for him.

“There aren’t any grownups. We shall have to look after ourselves.”

“The older boys, other than Piggy, are excited to be without grownups. As the story goes on and the situation deteriorates, Ralph and his crew wish for adult supervision.”

“They looked at each other, baffled, in love and hate.”

“The mask was a thing … behind which Jack hid, liberated from shame and self-consciousness.”

“Which is better—to have rules and agree, or to hunt and kill?”

“Ralph wept for the end of innocence”

“We did everything just the way grownups would’ve. Why didn’t it work?”

“His mind was crowded with memories; memories of the knowledge that had come to them when they closed in on the struggling pig, knowledge that they had outwitted a living thing, imposed their will upon it, taken away its life like a long satisfying drink.”

“The desire to squeeze and hurt was over-mastering.”

“There were no words, and no movements but the tearing of teeth and claws.”

“He began to dance and his laughter became a bloodthirsty snarling.”

“The trouble was, if you were a chief you had to think, you had to be wise.”

“The rules!” shouted Ralph, “you’re breaking the rules!” “Who cares?”

“If only one had time to think!”

“I ought to be chief,” said Jack with simple arrogance, “because I’m chapter chorister and head boy. I can sing C sharp.”

“He became absorbed beyond mere happiness as he felt himself exercising control over living things. He talked to them, urging them, ordering them. Driven back by the tide, his footprints became bays in which they were trapped and gave him the illusion of mastery.”

“There aren’t any grownups. We shall have to look after ourselves”

“I got this to say. you are acting like a crowd of kids.”

“Thought was a valuable thing, that got results.”

“What was the sensible thing to do? There was no Piggy to talk sense.”

“And you shut up! Who are you, anyway? Sitting there telling people what to do. You can’t hunt, you can’t sing…” “I’m chief. I was chosen.” “Why should choosing make any difference? Just giving orders that don’t make any sense…”

“Shut up,” said Ralph absently. He lifted the conch. “Seems to me we ought to have a chief to decide things.”

“I ought to be chief,” said Jack with simple arrogance, “because I’m chapter chorister and head boy. I can sing C sharp.”

These were some of our top picked Lord Of The Flies Quotes, keep following The Quotepedia for more wonderful and motivational quotes

Related quotes:  65+ Best I Miss You Quotes Which Will Make His/Her Day