The Hitchhiker’s Guide to the Galaxy is the science fiction novel written by Douglas Adams. It is the first book of the trilogy. This novel was initially published in London in the year 1979. The story shows about a person who gets saved by an alien name ford perfect, this alien provides info about every other planet in the galaxy from the earth just before it was destroyed by the alien Vogons.
This sci-fi novel is one of the best novels to read, it also teaches some incredible lessons which are worth to learn;
1. improbable and impossible are different: it always seems impossible until it is done. Improbable does not mean impossible, it just means the work cannot be done this way it is to be done in some other way.
2. Humans are not special: We are not special as we think we are. We bloody humans think that we are god and we can do whatever we want. It is not right, every living thing goes dry by the time and then die accordingly.
3. Questions are more important: Rather than answer questions are more important, it criticizes a particular thing or human. Questions are everything, look to the questions, and understand what they are.
4. Don’t panic: Whatever the situation be, just don’t panic and don’t lose calm, it is not easy to be not to panic, but focus and put energy in positive thoughts.
These were some wonderful understandable worth learning lessons. We have listed some of the great The Hitchhiker’s Guide to the Galaxy Quotes for you. Do enjoy them and try something new in life.

The Hitchhiker’s Guide to the Galaxy Quotes

“Would it save you a lot of time if I just gave up and went mad now?”

“Isn’t it enough to see that a garden is beautiful without having to believe that there are fairies at the bottom of it too?”

“He felt that his whole life was some kind of dream and he sometimes wondered whose it was and whether they were enjoying it.”

“I’d far rather be happy than right any day.”

“If there’s anything more important than my ego around, I want it caught and shot now.”

“For a moment, nothing happened. Then, after a second or so, nothing continued to happen.”

“Time is an illusion. Lunchtime doubly so.”

“The storm had now definitely abated, and what thunder there was now grumbled over more distant hills, like a man saying “And another thing…” twenty minutes after admitting he’s lost the argument.”

“It seemed to me,” said Wonko the Sane, “that any civilization that had so far lost its head as to need to include a set of detailed instructions for use in a packet of toothpicks, was no longer a civilization in which I could live and stay sane.”

“Nothing travels faster than the speed of light with the possible exception of bad news, which obeys its own special laws.”

“The last time anybody made a list of the top hundred character attributes of New Yorkers, common sense snuck in at number 79.” 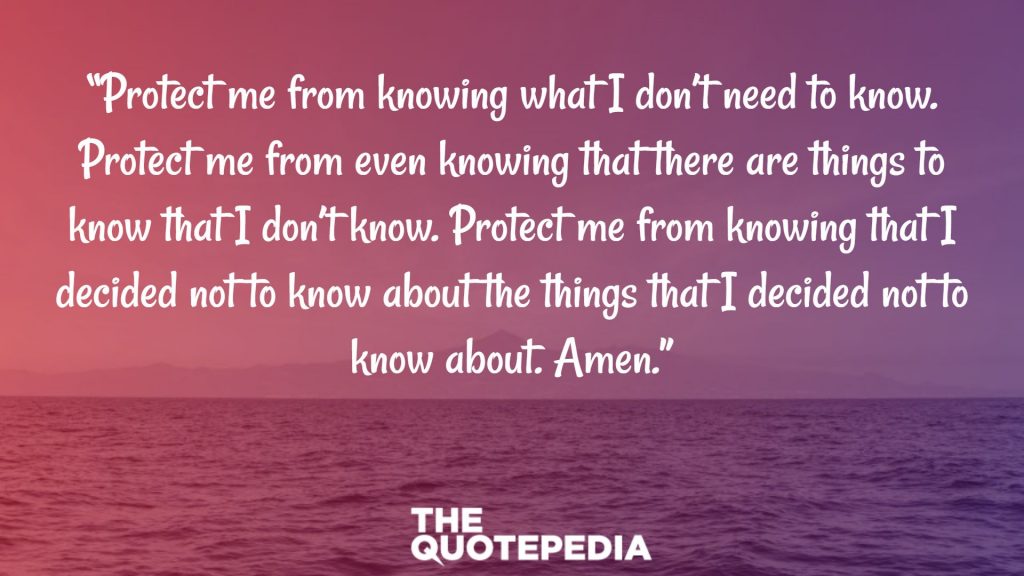 “All you really need to know for the moment is that the universe is a lot more complicated than you might think, even if you start from a position of thinking it’s pretty damn complicated in the first place.”

“”In the beginning the Universe was created. This has made a lot of people very angry and been widely regarded as a bad move.”

“Many were increasingly of the opinion that they’d all made a big mistake in coming down from the trees in the first place. And some said that even the trees had been a bad move, and that no one should ever have left the oceans.”

“My doctor says that I have a malformed public-duty gland and a natural deficiency in moral fibre,” Ford muttered to himself, “and that I am therefore excused from saving Universes.”

“The ships hung in the sky in much the same way that bricks don’t.”

“Space,” it says, “is big. Really big. You just won’t believe how vastly, hugely, mindbogglingly big it is. I mean, you may think it’s a long way down the road to the chemist’s, but that’s just peanuts to space.”

“Funny,” he intoned funereally, “how just when you think life can’t possibly get any worse it suddenly does.”

“Isn’t it enough to see that a garden is beautiful without having to believe that there are fairies at the bottom of it too?”

“A common mistake that people make when trying to design something completely foolproof is to underestimate the ingenuity of complete fools.”

“Curiously enough, the only thing that went through the mind of the bowl of petunias as it fell was Oh no, not again. Many people have speculated that if we knew exactly why the bowl of petunias had thought that we would know a lot more about the nature of the Universe than we do now.”

“You know,” said Arthur, “it’s at times like this, when I’m trapped in a Vogon airlock with a man from Betelgeuse, and about to die of asphyxiation in deep space that I really wish I’d listened to what my mother told me when I was young.”

“The reason why it was published in the form of a micro sub meson electronic component is that if it were printed in normal book form, an interstellar hitchhiker would require several inconveniently large buildings to carry it around in.”

“For instance, on the planet Earth, man had always assumed that he was more intelligent than dolphins because he had achieved so much — the wheel, New York, wars and so on — whilst all the dolphins had ever done was muck about in the water having a good time. But conversely, the dolphins had always believed that they were far more intelligent than man — for precisely the same reasons.”

“The last ever dolphin message was misinterpreted as a surprisingly sophisticated attempt to do a double-backwards-somersault through a hoop whilst whistling the ‘Star Spangled Banner’, but in fact the message was this: So long and thanks for all the fish.”

“The chances of finding out what’s really going on in the universe are so remote, the only thing to do is hang the sense of it and keep yourself occupied.”

“Listen, three eyes,” he said, “don’t you try to outweird me, I get stranger things than you free with my breakfast cereal.”

“Not unnaturally, many elevators imbued with intelligence and precognition became terribly frustrated with the mindless business of going up and down, up and down, experimented briefly with the notion of going sideways, as a sort of existential protest, demanded participation in the decision-making process and finally took to squatting in basements sulking.”

“The Total Perspective Vortex derives its picture of the whole Universe on the principle of extrapolated matter analyses.To explain — since every piece of matter in the Universe is in some way affected by every other piece of matter in the Universe, it is in theory possible to extrapolate the whole of creation — every sun, every planet, their orbits, their composition and their economic and social history from, say, one small piece of fairy cake. The man who invented the Total Perspective Vortex did so basically in order to annoy his wife.”

“Shee, you guys are so unhip it’s a wonder your bums don’t fall off.”

“It is known that there are an infinite number of worlds, simply because there is an infinite amount of space for them to be in. However, not every one of them is inhabited. Therefore, there must be a finite number of inhabited worlds. Any finite number divided by infinity is as near to nothing as makes no odds, so the average population of all the planets in the Universe can be said to be zero. From this it follows that the population of the whole Universe is also zero, and that any people you may meet from time to time are merely the products of a deranged imagination.”

“The disadvantages involved in pulling lots of black sticky slime from out of the ground where it had been safely hidden out of harm’s way, turning it into tar to cover the land with, smoke to fill the air with and pouring the rest into the sea, all seemed to outweigh the advantages of being able to get more quickly from one place to another.”

“Make it totally clear that this gun has a right end and a wrong end. Make it totally clear to anyone standing at the wrong end that things are going badly for them. If that means sticking all sort of spikes and prongs and blackened bits all over it then so be it. This is not a gun for hanging over the fireplace or sticking in the umbrella stand, it is a gun for going out and making people miserable with.”

“It is a well known fact that those people who most want to rule people are, ipso facto, those least suited to do it. To summarize the summary: anyone who is capable of getting themselves made President should on no account be allowed to do the job.”

“Since we decided a few weeks ago to adopt the leaf as legal tender, we have, of course, all become immensely rich.”

“In the end, it was the Sunday afternoons he couldn’t cope with, and that terrible listlessness that starts to set in about 2:55, when you know you’ve taken all the baths that you can usefully take that day, that however hard you stare at any given paragraph in the newspaper you will never actually read it, or use the revolutionary new pruning technique it describes, and that as you stare at the clock the hands will move relentlessly on to four o’clock, and you will enter the long dark teatime of the soul.”

“He gazed keenly into the distance and looked as if he would quite like the wind to blow his hair back dramatically at that point, but the wind was busy fooling around with some leaves a little way off.”

“He was staring at the instruments with the air of one who is trying to convert Fahrenheit to centigrade in his head while his house is burning down.”

“There is a moment in every dawn when light floats, there is the possibility of magic. Creation holds its breath.”

“You may not instantly see why I bring the subject up, but that is because my mind works so phenomenally fast, and I am at a rough estimate thirty billion times more intelligent than you. Let me give you an example. Think of a number, any number.”

“There is an art, it says, or rather, a knack to flying. The knack lies in learning how to throw yourself at the ground and miss.”

“It is a mistake to think you can solve any major problems just with potatoes.”

These were some of our top picked The Hitchhiker’s Guide to the Galaxy Quotes, keep following The Quotepedia for more wonderful and motivational quotes